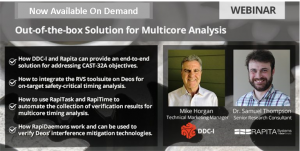 rimary challenge designers of modern avionics systems face today is how to implement an efficient means of verifying multicore systems. Specifically, one of the more daunting multicore development tasks is to quantify and optimize an application's worst-case execution times – especially in the context of multicore interference caused by applications running on other cores that share common resources (e.g. cache, memory, etc.). Up to now, most avionics companies have had to develop or integrate their own tooling for this capability.

DDC-I has been refining Deos's DAL-A multicore strategy and features for well over a decade, developing an RTOS that effectively addresses the objectives of CAST-32A. Deos's use of advanced technologies – such as cache partitioning – enable greater performance to be harnessed in the multicore system, whilst also maintaining re-use and functional capabilities.

Rapita has worked closely with DDC-I to develop this seamless, hardware-agnostic integration of RVS with Deos, which is portable to every architecture supported by Deos (PowerPC, ARM, and x86). In this approach, tracing is accomplished by applying RVS instrumentation with a trace mechanism available within Deos kernel. Further, RapiDaemons (interference generators) provide the means to simulate applications running on other cores and imposing upon shared resources. Together, all of these capabilities enable the integrator to qualify Deos-based multicore systems and determine how to best arrange multicore applications for optimal systems performance.

To download the webinar, please complete the form below. A link to download will appear at the bottom after completion.