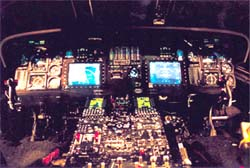 Finally fulfilling Igor Sikorsky’s decades-old dream of vertical flight, the tubular steel frame and open cockpit of the experimental VS-300 helicopter first took to the sky on September 14, 1939. True to his predictions, the multi-mission capability of his new breed of flying machine emerged soon after delivery of the initial XR-4 prototype to the U.S. Army Air Corps in May 1942. The Sikorsky R-4 flew its first mercy mission in 1944, surviving a winter snowstorm to deliver vital medical supplies to the victims of a warship explosion.

Over sixty years later, the R-4’s modern descendants are turbine-powered, constructed of ultra-light alloys and composite materials wrapped tightly around real-time embedded systems technology, and the Sikorsky name remains synonymous with the leading-edge of innovation in helicopter design.

Sikorsky’s Black Hawk family presents an unparalleled level of mission capability at the beginning of the 21st Century, with the 2,600+ delivered since 1978 logging over five million flying hours. More than 1,500 Black Hawk’s currently serve in American active duty and National Guard units around the globe, and the bird’s unflinching performance in combat, disaster relief, and humanitarian roles continues to test its durability, from the heat and fury of Desert Storm to the frozen spires of the Tyrolean Alps.

Ironically, the same versatility that affords Black Hawk derivatives the ability to serve so many roles also presents a steady stream of challenges to the hardware and software engineers that keep the bird — and the real-time embedded systems underlying its airborne talents — at the forefront of aviation technology.

“For many years, much like the rest of the aerospace industry, when a customer requested modifications we would invest two to three years redesigning specific systems for their application. Then another customer would say, ‘but I want this,’ and we’d go through the process all over again,” explains Bret Stockreef, a Senior Systems Software Engineer at Sikorsky Aircraft’s Stratford, Connecticut headquarters.

According to Stockreef, aside from the UH-60L’s status as the most advanced twin-turbine military platform in the world, other standard Black Hawk versions include the state-of-the-art EH-60A electronic warfare and MH-60K Special Operations aircraft, the VH-60 executive transport, the U.S. Air Force HH-60G Pave Hawk, the U.S. Navy Seahawk family, and the U.S. Coast Guard HH-60J Jayhawk for search and rescue.

With Sikorsky for over 12 years, and McDonnell-Douglas for three years prior as a weapons engineer on nuclear systems, Stockreef started as a systems engineer, later moving into software engineering. His first project involved redesign on the SH-60F for the U.S. Navy, and later projects included modifications to the S-70A platform for foreign customers. His primary responsibility today is the role of lead software engineer for all of Sikorsky’s maritime programs.

Stockreef highlights a current project, involving a major upgrade of the cockpit visual display systems, originally designed in 1973, as the clearest indicator of where Sikorsky is heading in terms of reducing overall development costs via standardization.

“We got to a point as we were adding functionality to the old system where we said, ‘these boxes are too heavy, they cost too much, and we’re running out of processor horsepower,’” he says.

With an eye to the bottom line, Stockreef’s team put together a business plan proposing a completely new breed of display and data input device called a CDU (Control Display Unit) for Black Hawk, alongside an entirely new MFD (Multi-Function Display). The numbers clearly indicated that for the cost reduction on the next program alone they would be able to fund all the non-recurring engineering costs.

“Essentially, the CDU is a data input device with a little glass window and alphanumeric keypads the pilot uses to enter data into the system. With a sign-off from the top brass, we chucked all of the old system boxes and brought in completely new hardware being built by Rockwell-Collins,” he says.

Because the proposed CDU was built around an 80486-based processor, which Sikorsky used in other programs, his team decided the most practical and cost-effective approach was to reuse available legacy code and port it to the new processor using their existing DDC-I Ada Compiler System (DACS) as the software development environment.

The results have been as solid as predicted, reducing the total number of system boxes in the helicopter from twelve to six, generating a major real estate and weight savings. The program’s success is also spurring increased movement toward system standardization across most of the Sikorsky product line.

“For the present, the new display system is going into multiple platforms in our international product line, and we’re evaluating all of our helicopters. While Comanche probably won’t see it, all of the international helicopters are being discussed, possibly even the S-92 and the MH-53, but there is no firm plan right now. For the moment, the main effort is on the international Naval Hawk and Black Hawk,” says Stockreef.

Used by all five branches of the U.S. Armed Forces, as well as civil, military, and commercial operators in over 40 nations, non-military versions tackle missions as diverse as fire fighting and backcountry rescue, while military roles include troop transport, cargo lift, combat search and rescue, and medical evacuation.

Recently, the 41st Rescue Squadron from Moody AFB in Georgia was on its way home from Operation North Watch (Northern Iraq Ops) in Turkey when they were diverted to provide flood relief in Mozambique. Captain Roberts, commander for the African operation, pointed out that the mission went off well despite the different mission styles.

“The H-60 is an incredibly durable and flexible machine,” he says. “Our team of 30+ people flew the three HH-60G Pave Hawks we had to the very edge of their capabilities. We took off daily at max gross weight…flew them daily at nearly max power to save time, and consistently put off required maintenance. I cannot understand how [Sikorsky] engineered such a fine helicopter.”

Joining the training exercise during a mass casualty drill on July 17, he shed his suit and tie in favor of moulage simulating a serious shoulder injury sustained during an earthquake. He was run throuigh triage, processed, and transported quickly to the field military hospital by helicopter for further medical treatment.

He departed impressed with the performance of the helicopter and the international spirit of the operation: “I was handled and treated by a combined team of American, Romanian, and Moldovan soldiers. I could see with my own eyes the kind of cooperation that we have in the PfP (Partnership for Peace) and in NATO.”

Sikorsky also maintains licensing agreements with Westland of the United Kingdom, Mitsubishi Heavy Industries of Japan, and Korean Air. Sikorsky and Korean Air co-manufacture Black Hawk helicopters for the Republic of Korea, while in Japan, MHI is licensed to produce Seahawk and Black Hawk derivatives.

Stockreef asserts that the diverse needs of a growing list of international customers only increases the need to standardize parts and processes wherever possible. For the CDU, development partner Rockwell-Collins is writing the primary flight display software, while Stockreef’s team serves as the overall project integrator and lead software developer.

Using the DACS compiler specifically for the 80486 in the CDU, they are also using vendor tools to write embedded code for a pair of TI 320C31 DSPs in a dual processor configuration, one handling flight management and the other mission management. While C++ is used, most of the embedded system code is in Ada, which he sees as a large advantage when it comes to porting the code to a different processor.

“They’re re-hosting some of the software we have, including DACS for the CDU, and we’re doing a work-split with them. We’ll say, ‘you do this function,’ and they send us a drop every two or three weeks. We check it, do the build, and do the integration testing here,” he says.

In light of their co-development with Rockwell-Collins, he adds, “we have looked at [multiple team/platform project management], but it turns out that some of the development platforms we originally chose for their configuration management tools don’t easily support multi-location development.”

On the path to progress, Sikorsky is creating internal ‘co-development teams’ for project platforms. Instead of engineers being in a functional group, with all the software, system, and test engineers’ sitting together, individuals are attached to specific projects. They have also created a “core competency” functional group directly responsible for process standardization and integrated development issues. The group is currently evaluating how to approach multiple-location and configuration management.

Meanwhile, they are undoubtedly observing the experience of the Sikorsky team participating in the innovative “round table” development process for the Comanche helicopter. DDC-I is also a member of the Comanche group, contributing a customized version of the DACS environment aptly named the Comanche ACS, which has been redesigned to provide first class integrated project management tools and utilities for the multiple vendor teams. Managed by Boeing, the Comanche software program is one of the most extensive development projects for safety-critical real-time embedded systems ever undertaken.

Sikorsky also received their SEI Level 3 rating recently, and standardizing development processes across all of the platforms is underway as they apply guidelines developed via the certification process.

Speaking about DDC-I’s role and the benefits of DACS environment used for the CDU program, Stockreef says, “The biggest cost benefit is that we’re very familiar with it. It’s robust, and has been used on several programs so we’ve got plenty of hands-on experience. We’ve been able to reuse a lot of legacy code.”

“From personal experience when we initially set this up, compared to a lot of other vendors that we’ve dealt with as far as compilers and other peripheral equipment, their support has been very good. We were using an ARINC data loader and we bought the DDC-I interface and cards, and their support had me up and rolling in about ten minutes. They e-mailed the right drivers and off we went. I got my load time down from thirty minutes to about five,” he adds.

All in all, Stockreef sees DDC-I as a staunch ally in the march toward standardization at Sikorsky, which couldn’t have come at a better time in light of new Black Hawk development currently underway.

In addition to all of their current international customers, the CH-60S is the first newly designed rotary-wing aircraft added to the U.S. Navy fleet since the HH-60H nearly a decade ago, marking a return of Navy production at Sikorsky since the fulfillment of Navy Seahawk requirements in 1996. The first production CH-60S completed its initial flight on January 27, 2000 at Stratford, and the Navy plans to purchase more than 200 CH-60S aircraft to replace the CH-46D, with ten CH-60S aircraft scheduled for delivery in 2000.

“We’re trying to get to one configuration for each aircraft as far as the avionics as well as development tools,” he concludes. “Standardizing wherever its feasible will save everyone time and money. We will be able to deliver more quickly, and our customers will be able to afford ten helicopters instead of nine.”